Don’t make these 17 major job interview mistakes that could cost your the position, even before the end of the interview.

Prepping for a job interview? There’s a whole checklist of things you should definitely not do.

A new survey has found the most egregious mistakes job candidates can make in the interview that will cause them to be rejected for the position.

Resume writing service TopResume, gave 316 employers and recruiters a list of common interview mistakes and asked them to rate how offensive each one is on a scale of 1 to 5, with 1 being Not Serious At All and 5 being Extremely Serious. Each mistake was then given a weighted average based on its rating, and ranked to determine which ones employers consider the most damaging to a candidate’s chances.

When asked, “Would any of these interview mistakes cause you to reject a candidate?” 92% said that yes they would.

It isn’t any surprise that lying topped the list. It tops most of these lists. Nor should it be a shock that “appearing disinterested in the opportunity” came in second place. Nobody wants to hire someone who doesn’t actually want the job.

Here is the full list of the most offensive “interview deal-breakers” that could cause an employer to dismiss a candidate, sometimes even before the end of the interview:

These are all good things to note, and some are more obvious than others. Don’t forget to bring a hard copy of your resume, and do send a thank-you note. “Failing to follow up after the interview” may be one of the least offensive deal-breakers, showing up in 15th place our of 17 bad  behaviours, but 51% of those surveyed did say that receiving a thank-you email or mailed note after an interview impacts their decision-making process.  Also, don’t bring your parents. One might think this goes without saying, but it seems that people do this.

Lying is a really dumb thing to do

And we can’t stress this enough: don’t lie. If you get caught, you will destroy your chances of getting the job and possibly even your reputation in your industry. You never know who is connected to whom. Moreover, if you are caught in a lie and don’t get the job, you will likely never know that you were caught. They aren’t going to reach out and tell you. They’re just going to reject you. 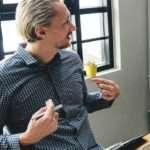