New data shows that hiring managers are looking at job applicants differently now than they did just six months ago – before the pandemic took its toll on the economy.

A survey of over 300 recruiters, HR professionals, and hiring managers from across sectors found that previous candidate red flags are no longer deal breakers – while common courtesy and communication style are becoming more important.

In good news for the 1.3 million Canadians who have been out of work for six months or more, participating employers said that they are less concerned with employment gaps in resumes than they used to be.

It is encouraging to see that employers are not judging candidates unfavourably for finding themselves unemployed for longer periods of time, when it is cause by a global health emergency that was unforeseeable and out of their control.

What employers are increasingly focussing on now

While survey respondents say they care less about employment gaps right now, they care more about cover letters and thank-you notes than they used to.

When asked to respond to the statement, “I’m now more likely to read cover letters than before the pandemic,” roughly half of the hiring professionals (48 per cent) agreed, another one-third were neutral (34 per cent), whereas only a smaller group (18 per cent) disagreed.

While the majority of HR professionals and recruiters that I have spoken with over the years have told me that they seldom if ever read cover letters, this new survey indicates a shift in employer behavior. During the COVID-19 pandemic, they are taking more time to consider all of the materials submitted by a job applicant before selecting who to interview.

Similarly, if you do land that interview, be sure to follow-up with a thank-you note afterwards. The survey participants were given the statement “A candidate’s thank-you email/note (or lack thereof) takes on greater importance when evaluating a candidate.” A large majority (68 per cent) of employers agreed that the thank-you note has become more significant, 20 per cent were neutral, and only 12 per cent disagreed.

Sending a thank-you note is always a good idea. While an employer is unlikely to hire you specifically because you sent them an email after the interview, it can set you apart from any other potential candidates who failed to do so. Plus, it’s just common courtesy to show your appreciation to an employer for taking the time to meet with you (even virtually) and consider your candidacy.

With interpersonal, online, and written communication skills at such a premium right now as so much of business is conducted remotely, employers say they are placing much more focus on your correspondence before and after the interview when they consider hiring you during the pandemic.

It doesn’t have to be a great deal of work. Here is how you can write an effective cover letter in just six sentences, and how you can craft a post-interview thank-you note in only four sentences with a few examples to help you out.

This survey was conducted between August 26 and September 4, 2020 by the team at TopResume. 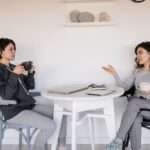